[Alex] Hey all, something a bit different today. Short story is I have got two reviews lined up plus a very special mod project that is nearing completion…

…but while we wait, I wanted to share a game type that my local Hobart Nerf Squadron group plays. I was inspired to do this when Rob from SBNC shared his “Spaghetti Western” game type, so I thought I’d do the same.

But before I explain how the game works, please note that in our HNS games we usually play by a “Life Token” system. We use key chain tags as counters for how many lives we have left. For example say you have three physical Life Tokens in your hand; when you get hit / tagged, you go back to the designated Respawn point, and “spend” a Life Token (like currency) to get back in the game. This means you effectively have *four* Lives in total.

We call this particular game type “Outlaws” which has become one of our most requested games to play over the last 12 months - and is actually inspired from a card game called “BANG!”

The “Outlaws” game works like this, starting with the different Roles:

- One player is the Sheriff.
- Half the remaining players (rounded up) are Outlaws
- The other half (rounded down) are Deputies.
- (Optional: when 7+ players are participating) one to two players are Renegades 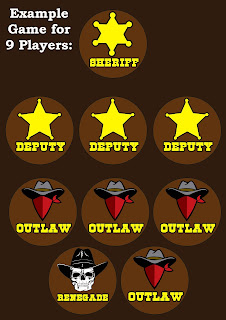 In the case of the image above, because there are three Deputies in play (rounded up makes four) the Sheriff gets two *PLUS* another two Life Tokens = four,

We choose to put blaster and dart limits on for this game to make it more interesting. The following blaster types are permitted:
- Single shooters (Firestrike, Sidestrike, Jolt, etc)
- “Shotguns” (anything that shoots multiple ammo at once like a Rough Cut / Sledgefire, or with smart AR like the Crossfire bow / Triad, etc)
- Revolvers (Strongarm, Hammershot, etc)
- Non-battery powered magazine fed blasters *but only using 6-dart mags* (eg: Retaliator, Slingfire, etc).
- Anything battery powered and any magazines that are larger than 6-dart capacity are not permitted or recommended.

We usually recommend *one* blaster per player, except the Sheriff can dual wield two Single Shooters or two Revolvers.

We also recommend a limit of 30 darts per player when less than 12 players are playing, then up to 50 darts if there are 12 or more players playing – this is not just for game balance but also adds a scavenging element to the game; to be careful when picking your shots. (It also helps to assist dart pick up cleaning time when the game is over).

Now… here is the kicker; EVERYONE BUT THE SHERIFF HAS TO KEEP THEIR ROLE A SECRET – ONLY THE SHERIFF’S IDENTITY IS KNOWN!!

If this doesn’t make sense thematically, imagine a western town has been overrun with bandits, who have killed off the local Sheriff. A new one is sent in from a nearby outpost to reclaim the town, but there is one problem; they have no idea of who the residents are. He/she simply walks into total chaos where everyone is fighting everyone just to stay alive… THAT’s the vibe we were aiming for when we created this game, to replicate the chaos that ensures from the BANG! card game which follows similar mechanics of anonymous allies / enemies.

Before the game begins we count how many total players there are, have enough Role Tokens for each person to play a Role, and put them into a hat or box. People randomly draw a Role out of the hat/box, and if they are the Sheriff they call it out… and they get to wear the gimmicky Cowboy hat to identify them. Everyone else has to shut up and keep their Role a secret.

Only when a player is eliminated from the game (run out of Life Tokens *and* their last Life) that is when they notify the other players of what their Role was. This particularly helps the game hosts keep count of how many Outlaws / Renegades are left without having to go around and ask each other player what they are, potentially giving away their identity. (NOTE: If a player reveals their Role identity prematurely, they are eliminated from the game instantly. Not so much that they break the rules, but it ruins the balance of gameplay for the enemies).

So basically the Sheriff doesn’t know who his/her allies or enemies are… it’s a mind game to work out who to take out and who is keeping your back safe. Actions speak louder than words; usually the ones being really obvious and shooting at the Sheriff risk falling first, but the sneaky and persuasive players tend to outlast their friends and foes alike. The Renegade/s often acts like a Deputy to start with, but turncoats when the odds are in their favour. 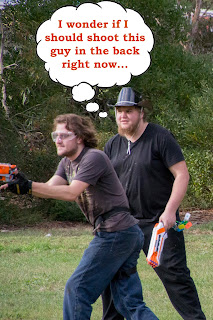 There is a bonus rule as well; if a Sheriff accidentally outright eliminates a Deputy, the Sheriff automatically loses a Life Token. It is vital that Deputies don’t stray too far from their Sheriff, both to prevent Outlaws from attacking, but also not to get the Sheriff’s doubts and suspicions raised about their allegiance!

Ultimately this may sound like a confusing game type to set up, but once you get the set up sorted (Life Tokens, Role Tokens, blaster and dart limits) everything falls into place pretty quickly after a few practice runs. Trust me that once you’re in the swing of it, the awkward tension and the duels that arise from not knowing who will strike first – and more importantly, WHO to strike first – really makes it a unique type of game.

Sing out if you’ve got any questions or want more info on how to play :D